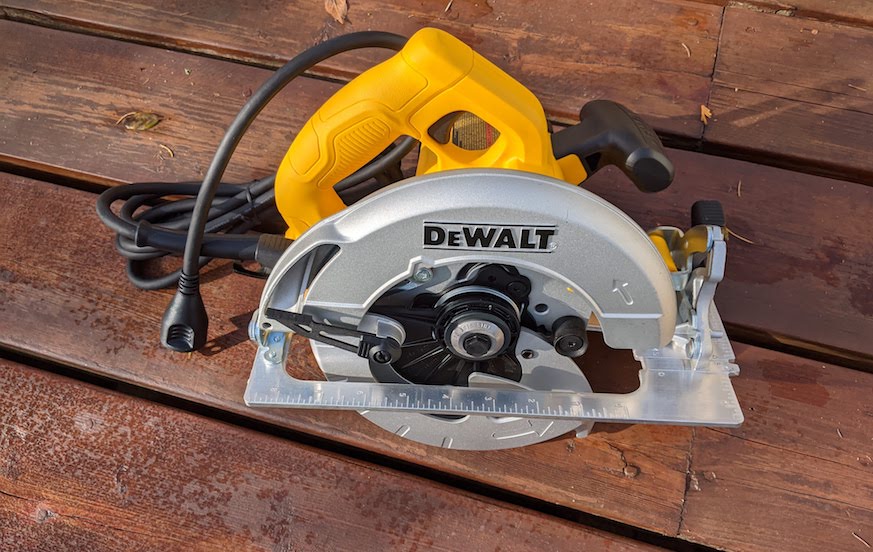 When it comes to circular saws, extra bulk and weight can be a serious hindrance to performance. If you’re using your saw for a full day of work, even a few extra ounces can be the difference between using your saw comfortably and wasted time from your arms getting worn out.

DeWalt is well aware of the need for lightweight tools which still pack the same punch as their heftier counterparts. This is where the DeWalt DWE575 circular saw really shines. It uses a number of exceptional design improvements to cut the saw’s overall weight down to just 8.8 pounds.

While it may not sound like that much, the saw manages to cut ¾ of a pound off of its predecessor and is one of the lightest in its class. When you’re using the saw overhead, or using it to make hundreds of cuts in a day, this weight reduction is immediately noticeable and a welcome change.

Right out of the box, the tool feels like typical DeWalt quality. Everything on the saw looks and feels solid, and you can tell this thing is tough enough to survive a few falls from the top of a ladder or rafter and keep on kicking. 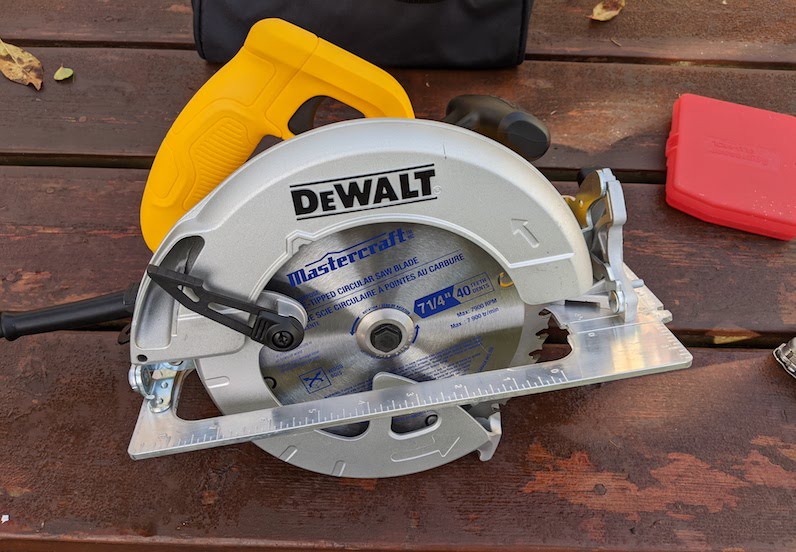 The solid aluminum shoe feels rock-solid and has no wiggle room to it whatsoever. It’s significantly better than cheap stamped metal shoes you typically find on cheaper saws from other manufacturers.

Adjusting the cutting depth and bevel angle are both done with smooth all-metal levers, that lock up solid. The grip feels comfortable and natural, and the foregrip is well-positioned and feels natural when making cuts.

One interesting feature you’ll probably notice right away is the integrated blade changing wrench tucked underneath the power cord. It’s conveniently located out of the way and is easy enough to use when changing blades.  This is a super handy feature, and means you’ll never need to scour your toolbox or garage for the right sized wrench again!

A 24-tooth rough-cut framing blade comes included with the saw, which I replaced with an all-purpose 40-tooth blade for all-around use.

In addition to cutting down on weight, DeWalt has added a number of other features and upgrades to the DeWalt DWE575 circular saw. Let’s take a look at these in more detail, as well as break down how the saw performs during various cutting tasks.

The shoe is made from solid high-grade aluminum, which is one of the ways DeWalt’s been able to cut down on weight from previous magnesium shoe models. While it’s certainly light, it still manages to feel incredibly solid in hand, giving the impression that it will easily withstand the inevitable jobsite drops and falls onto hard surfaces.

The all-metal lower blade guard is equally impressive, with a butter-smooth ball bearing operation that ensures it won’t snag on anything while you’re making cuts. I had no issues with this guard at all, and hardly noticed it at all when ripping and cross-cutting a variety of materials – which is exactly what you want in a blade guard.

The first thing I noticed about the saw is that it cuts completely straight and accurately right out of the box. This really shouldn’t be exceptional, but with so many circular saws having issues out of the box, this was a welcome find.

The blade height and bevel adjustment levers are really tough and really solid feeling but can be a little stiff to loosen. All of the notches and measurements on the shoe and bevel are etched onto the metal, which makes them a little difficult to see from a distance, but this is relatively minor. 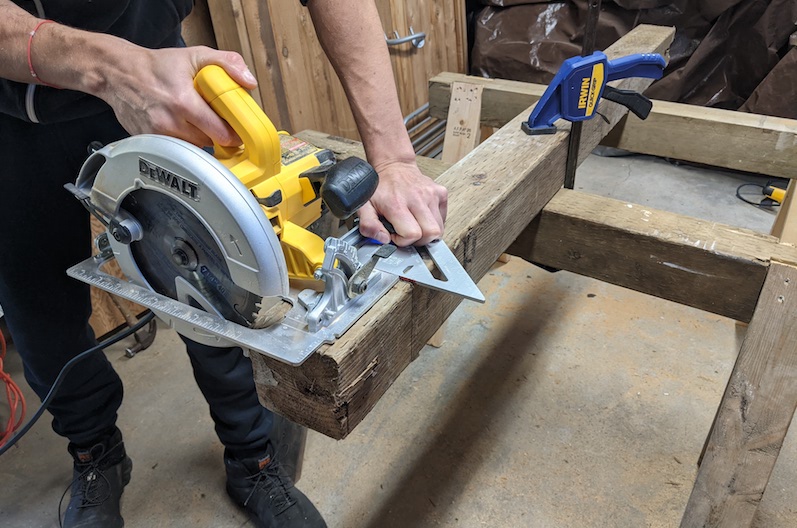 Both ripping and cross-cutting came out smooth and accurate, with clean edges and a factory-like appearance. Cutting without a guide also worked surprisingly well, even when ripping plywood sheets.

A note about electric brakes:
One thing you’ll notice is that the saw doesn’t utilize an electric brake. An electric brake stops the saw blade from spinning as soon as the trigger is released. This means you don’t need to wait for the blade to stop spinning before you can put it down safely. This isn’t necessary but is a handy feature to have, especially if you plan on using the saw on a daily basis.

Luckily, DeWalt makes an identical model with an integrated electric brake. The DeWalt DWE575SB makes an excellent choice for carpenters, general contractors, and other professionals, and also comes with a soft case and soft grip.

It’s clear that DeWalt’s put some serious thought into the saw’s design.

The ToughCord system prevents cord pull-outs from occurring, which is a welcome feature for those of us who sometimes like to raise and lower power tools by their cords!

An integrated dust blower keeps your cutting surface clean and easy to see, which can be a serious game-changer when you need to make cuts without a guide.

Lastly, no tool review would be complete without some consideration of the price.

DeWalt has priced the saw competitively, at approximately $120 retail pricing, and $10 to $20 more for the electric brake model. This puts it roughly on par with similar saws for other pro tool manufacturers like Makita, Milwaukee, and Bosch.

To sum up, the DeWalt DWE575 circular saw makes an excellent saw for both DIYers as well as pro users like general contractors and framing carpenters. It’s one of the lightest saws in its class, which makes using it for prolonged periods of time significantly less stressful on the wrists and elbows.

With a 15 Amp motor, and a 57° beveling capacity, the saw has more than enough power and versatility to get any cutting task done quickly and efficiently. An integrated dust blower, blade-changing wrench, and ToughCord enhance the saw’s usability and make all sorts of cutting tasks a breeze.