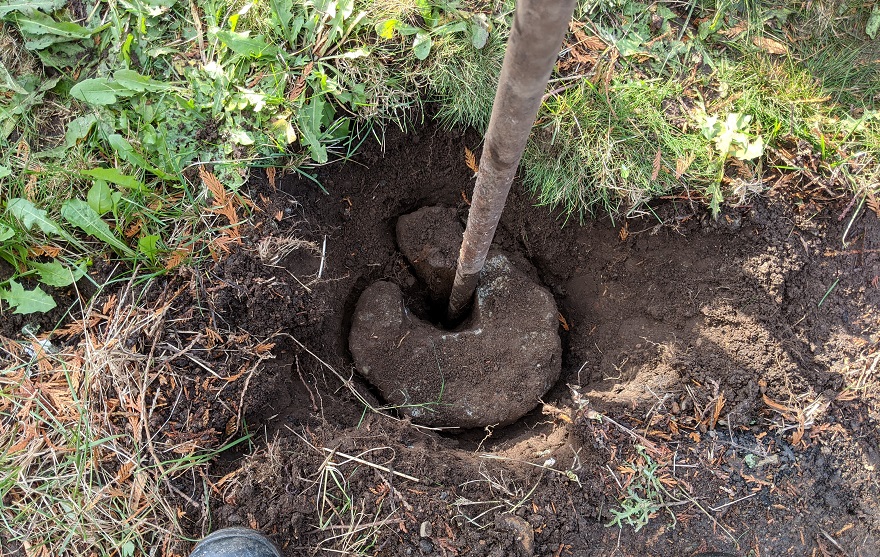 How do you remove broken fence posts set in concrete anyway?

Pulling a broken fence post out of concrete is kind of like pulling a tooth – it’s difficult, painful, and requires some serious effort to get it right. If your fence post is broken near ground level, then you won’t be able to mount another piece of wood to the post to use as leverage.

That leaves you with a broken, often water-damaged, piece of fence post, and an old concrete footing that needs to come out of the ground. Not an ideal situation.

You can approach the problem from a few different angles.

You can dig around the post hole, and then use several long pry bars to lever the concrete footing out of the ground. If the wood left inside the footing is not completely rotten, then you can sometimes screw a large eyebolt into the wood and then pull it out with a rope or chain.

You can also use a large pry bar with a chisel end to break up the concrete footing into smaller pieces, and then pull it out by hand.

Let’s take a look at these different ways to remove broken fence posts set in concrete.

How to Remove Broken Fence Posts Set in Concrete – Guide

This method may look like a lot of work, but it’s actually less strenuous than trying to remove the entire concrete footing in a single piece. It will also keep the hole fairly small, so you’ll save concrete when you set the new fence post in concrete.

The first step is to remove or break up the remaining fence post left inside the concrete. If the wood is old and rotten, then this should be fairly easy.

Lift your digger bar chisel up high and use its weight to strike the old fence post. It should splinter and break apart. Then reach down and remove as much of the old wood post as possible.

If the post is old and loose, you may be able to pull it out in a single piece.

Step 2: Dig around the perimeter of the posthole

Use your shovel to dig a little gap between the concrete footing and the ground. This doesn’t need to be large, just dig enough to get your digger bar in the gap.

Keep in mind the more you dig up, the more difficult it will be later on when you need to replace the old post with a new one.

Step 3: Break up the Concrete Footing

Now for the hard part!

You’re going to need to break up the concrete footing in order to get it out of the posthole. Luckily, if you have the right tools, breaking concrete into smaller chips is totally doable.

You can use a variety of tools for this task, but the important thing is they’re big and heavy! A sledgehammer or digger bar chisel both work well. Don’t be afraid to really hammer the footing – it’ll break up eventually.

If you’re using a digger bar like I am, try inserting into the posthole and then levering it with force until the concrete footing cracks in half.

If you happen to have a powered demolition hammer or access to heavy machinery like an excavator or loader, then breaking up the post should be effortless.

Reach down into the posthole and remove the chipped pieces of the concrete footing. You can try removing it when it’s broken in two or three pieces, but you may need to break it up further in order to get it out of the posthole cleanly.

Method 2) Dig and Lever the Footing

This method requires more digging than the first one, plus you’ll at least two extended length prybars.

You’ll need to dig around the posthole to make room to get your pry bars underneath the footing and posthole. If the soil is tough, soaking it thoroughly with water can make digging it up easier.

You’ll need to dig a wider hole than you would with the previous method.

Jam the prybars as deep as possible on opposite sides of the footing. The goal is to get the flat surface of the prybar underneath the footing and pry it up at an angle.

You may need some assistance to get both of the prybars in position. Try working the prybars one at a time – with one person applying pressure and stabilizing as the opposite one pries.

You can increase the leverage applied by the prybars using one of more short 4×4’s on the ground as fulcrums.

Step 3: Lever the Footing out of the Posthole

When you’ve got the two pry bars in position, it’s time to start levering the concrete footing out of the ground.

Work one pry bar at a time. Remove one bar completely from the hole, while the other one maintains the position of the footing. Then re-insert the one you removed lower than before and lever the concrete base upwards. Then switch sides.

You’ll need an extra hand to do this effectively.

As the concrete base starts to come out of the ground, you may be able to get your arms around it and pull it clean out.

This method can be hit-or-miss, depending on the structural integrity of the remaining wood post. The basic idea is you fasten a large eye-bolt into the wood post and use a rope, chain, or some type of jack to lift the entire base out in one piece.

Then, use your drill to create a pilot hole in the remaining wood post. Use a drill bit that slightly narrower than the eye bolt. If part of the post is damaged or waterlogged then drill into the most solid section.

Next, insert the eye-bolt into the pilot hole and screw it in. You can do this by hand, or by using a screwdriver threaded through the eye-bolt for additional leverage.

When the eye-bolt is threaded all the way into the pre-drilled hole, test it to make sure it’s secure.

Thread a length of heavy-duty rope (or chain) through the eye and secure it with a truckers hitch knot. Then pull on the rope until the concrete footing comes loose from the posthole.

If the concrete base is stuck in the soil, or if you have tough, clay-rich soil, then you may need to dig around the hole first. You can soften up the soil by soaking it for several hours with a garden hose.

If you have a high-lift jack or a post-popper, then you’ll be able to use leverage to pull the concrete plug with ease.

Hopefully, you now have a better idea of how to remove broken fence posts set in concrete. It’s not the easiest job out there, but once it’s done you’ll be able to set your new fence in the ground.