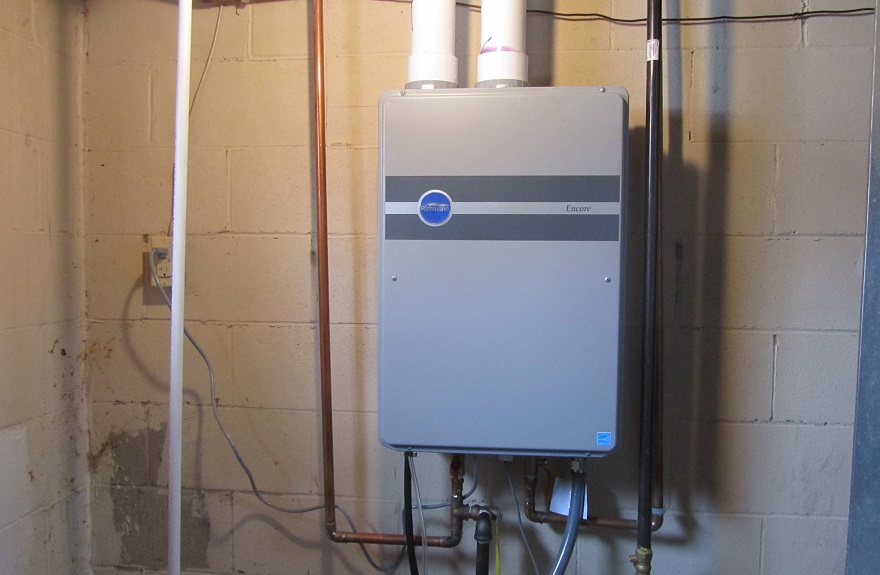 Tankless water heaters are all the rage these days – and for good reason. They’re energy-efficient, will never run out of hot water, provide instant heating on demand, and will outlast a traditional tank heater by as much as a decade.

However, it’s not all rainbows and butterflies. Tankless heaters come with their own set of drawbacks that make them the wrong choice for certain situations. They’re significantly more expensive than traditional hot water heaters, are often more complicated to install, and may not work well for multiple water outputs simultaneously.

With that in mind, how do you determine if tankless water heaters are worth it for you?

I’ll break down everything you need to know to make that calculation for yourself – so you won’t be stuck with the wrong water heater.

How does a tankless water heater work?

Tankless water heaters heat up water on demand using gas or electric coils. There is no ‘storage’ tank needed, as the heating takes place the moment you turn on the faucet.

The heater will adjust to the level of hot water needed by increasing or decreasing the flame or electric coil output. Tankless water heaters have a maximum level of output or ‘flow rate’ measured in gallons of water per minute (GPM). This number typically ranges from 2.5 to 5 GPM for most tankless models, which is enough for about two outputs at the same time.

The answer will depend on a number of factors, including your budget, available space, water usage, and your existing plumbing setup. Let’s take a closer look at these pros and cons.

One of the major advantages of tankless water heaters is their unlimited capacity. You can use as much hot water as your heart desires without running out. Tank heaters typically feature between 30 and 60 gallons of hot water, and once that’s used up you have to wait for the heater to catch up.

If you’ve got a bunch of people living in your house, then tankless water heaters can absolutely be worth it. You can run the shower back to back as many times as you need without running out of hot water.

While you can use an infinite amount of water, that doesn’t mean you can use it all simultaneously. Most tankless models can handle two simultaneous outputs at a time. That means you won’t be able to run the washing machine at the same time as multiple hot showers.

This can take a little getting used to at first, but once you’ve gotten the hang of it, it’s not a major drawback. Also, keep in mind you can install more than one tankless heater in your home. The units are about the size of a large suitcase, so you can install them in much tighter spaces than tank heaters.

Larger homes will benefit from multiple tankless heaters, which will enable a higher simultaneous capacity, and create even more energy efficiency.

A major selling point of tankless heaters is their impressive lifespan. A tankless heater typically lasts over 20 years – more than doubling the longevity of most tank models.

This means you won’t need to replace your tank heater every decade, which results in saving in the long run. Tankless heaters are also more durable – so they’re less prone to breaking down or even bursting.

Due to the increased lifespan, tankless heaters will also come with longer and better warranties. This means less risk of having something go wrong requiring expensive repairs.

This is one of the most important considerations when purchasing a hot water heater. Of course, the amount of savings you’ll receive will depend on the amount of hot water usage in your home.

If you have a larger house with many people using hot water, your savings will be significantly larger than someone living alone in a 1-bedroom apartment.

Tankless heaters eliminate so-called ‘standby loss’. This means they aren’t constantly reheating the water inside of a storage tank. This can result in significant savings over time, especially when you consider the amount saved over a decade+ of usage.

Government subsidies and tax credits for tankless heaters are another major selling point.

If you live in the US or Canada, you may be eligible for a tax credit/rebate when you install a tankless unit. In the US, a federal tax credit of 10% of the installation cost up to $300 can be claimed, with a lifetime limitation of $500 back to 2006.

Many states will also offer a similar tax credit to the federal one above.

The physical size of a hot water heater can have a serious impact on installation versatility.

Tankless heaters are significantly smaller than their tank counterparts. An average tankless unit measures about 2 feet tall and a foot wide, so it can be installed in tight spaces like under a sink, in a utility closet, or mounted to a wall like a circuit breaker.

Tankless heaters also have the option of installing on a house’s exterior, which can save even more space.

Tank heaters are significantly larger, as they require storage tanks to retain hot water for usage. An average tank unit measures 5+ feet tall and 2 feet wide, so it will take up significantly more space. If the heater is located in your unfinished basement, then this might not be a big deal. On the other hand, if it’s taking up space in your main closet, the extra space usage can be an issue.

Price is an important consideration whenever you’re making home improvements, so let’s dive into it.

On top of that, installation costs for tankless heaters will run you 2 to 3 times more than the costs for installing a standard tank heater. Think $150 to $600 for a tank heater and $400 to $1500 for tankless models.

All in all, you’re looking at 3X more initial costs for purchasing a tankless heater and having it installed.

So is the added up-front cost of tankless water heaters worth it in the long run?

This is a complex question, and the answer will depend on a combination of the aforementioned factors. Let’s take a look at a real-life example to determine whether a tankless water heater makes sense.

If we assume a tax credit of $600 (federal+state), then the payback period would be just 9 years. In this situation, upgrading is clearly the better choice.

If you’ve settled on a tankless hot water heater, then the next thing to consider is going with a gas model or an electric one.

Gas heaters cost a bit more money for installation, as they require hooking into gas lines. The units themselves are also more costly, running about $500 more than electric.

The advantage of gas is that it’s usually significantly cheaper to operate than electric models. It also has a longer lifespan and higher BTU output.

Electric heaters are significantly cheaper in terms of installation and unit cost, but will typically end up costing more in the long run. They also won’t last as long as their gas-powered counterparts.

Due to their size, versatility, and ventless operation, these heaters can be installed nearly anywhere you have extra space. This makes them excellent closet and under-the-sink units.

Of course, the costs of running each type depends heavily on the cost of electricity and natural gas in your location. In areas with abundant, cheap electricity, an electric heater can be a much better investment than gas. Be sure to check your local electricity/gas prices when making your decision.

Also, keep in mind, installation costs for gas models can be significant if you don’t have existing gas lines running through your house.

While tankless heaters have the advantage of tax credits and rebates, there are also newer Energy Star certified models that also qualify for tax credits.

Whatever type of heater you decide on, it’s important to consider all the associated costs and potential energy savings. Keep in mind, the best time to install a heater is when you’re already renovating or tearing up the place.