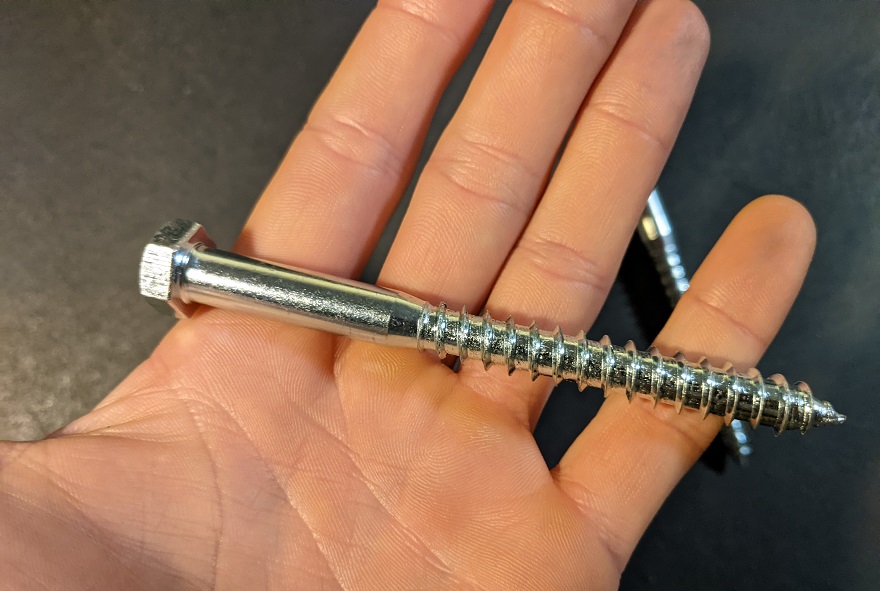 Lag bolts – sometimes called lag screws – are heavy-duty fasteners used to connect larger pieces of lumber. You can recognize them by their impressive size and their distinctive hex-shaped heads. Common sizes are 5/16-inch to 3/8-inch, which is massive when compared with other wood fasteners.

Although they look like oversized screws, lag screws actually function quite differently. They create a sort of friction joint that requires a pilot hole to be pre-drilled first.

Lag bolts and screws are commonly used when you need plenty of strength, toughness, and load-bearing capacity. Think of constructing decks, railings, mounting TV’s, or half-lap joints where wood screws aren’t up to snuff.

Let’s take a look at how to use lag bolts in step-by-step detail.

Step 1: Align and Clamp Materials Together

The first thing you’ll need to do is clamp together the two pieces of lumber (or other materials).  Measure the width of the two materials together, and pick a lag bolt that’s ¼ inch shorter than the combined width.

Mark the location of your pilot holes with a pencil or marker.

You’ll need a drill bit that’s slightly smaller than the diameter of your lag screws. This will ensure the lag bolts threads will have enough material to bind to.

Drill through both materials at least as deep as the length of your lag bolts. If you want to avoid drilling all the way through, use a piece of tape on your bit to mark the desired hole depth.

If you’re fastening two large pieces of lumber, your drill bit may not be long enough to reach the desired hole depth. In this case, unclamp the two pieces, and finish drilling through the second piece as you did with the first.

One difference between lag bolts and wood screws is their heads. Lag bolts have large hex heads that protrude out from the material when fastened.

This can be unsightly or even a potential hazard in some situations – think about protruding lag bolt heads on a flat deck. The solution to this is drilling countersink holes to hide the bolt head in the material.

Use a large spade drill bit to create a countersink hole in the pre-drilled pilot holes. Go a little larger than the diameter of the lag bolt head to give enough room for the socket to fasten the bolt flush with the material.

If you don’t have a spade drill bit, you can also use other large diameter bits. Just mark your desired countersink depth with a piece of tape on the bit.

Use a ratcheting socket wrench to tighten the lag bolts until they’re flush with the material.

You can also use a powered drill to do this if you have the right bit. If you’re going to go this route go slow and steady. Overtightening can cause the bolt to snap off inside the material – leaving you with a serious headache.

Remove the clamps, and voila – you’ve got yourself a rock-solid faster that will last the test of time.

As you can see, using lag bolts requires more effort and planning than simple wood screws. However, these fasters are second to none when it comes to durability and load-bearing capacity. Hopefully, you’re now well versed in how to use lag bolts and screws!