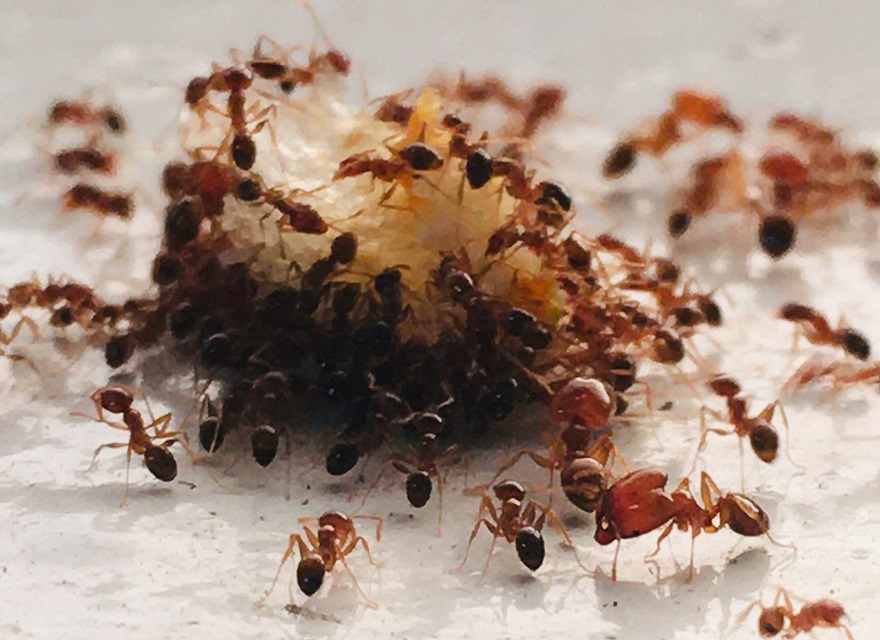 While ants are harmless enough out in Mother Nature, when you’ve got them in your kitchen, the situation becomes a lot more pressing. These pesky little critters can get into just about anything, are not easy to eradicate, and can turn a tranquil kitchen into a warzone!

Luckily, with a little effort and expertise, you’ll be able to get rid of ants in your kitchen or anywhere else in your home.

The first thing to keep in mind is that simply killing some of the ants won’t be enough to get the job done. If you’ve got ants in the kitchen, odds are good there’s a colony nearby. That means no matter how many individual ants you eradicate, you’ll still have more behind them until you knock out the egg-laying queen.

Individual ants are tiny, so sealing off their entry/exit route can be difficult. In addition, even if you successfully seal off their entry point, they can still survive on crumbs for quite some time.

On the plus side, most ants are relatively harmless, and more of a nuisance than a serious health risk. Unlike rats, mice, and other pests, they don’t transmit disease and won’t cause severe damage to your home.

Let’s take a look at some of the best methods of getting rid of ants in your kitchen and home, so you’ll be able to get back to living your life ant-free.

Getting Rid of Ants in the Kitchen – Step by Step

The first thing to do is take a good look at the ants you’re dealing with. Most likely, they’ll be some form of common house ants, which are annoying but not seriously threatening. If the ants are larger than typical ants – between a ¼ inch and ½ an inch – then you may be dealing with carpenter ants, which feed on rotting wood and can cause serious damage to windows, doors, or even framing members.

As you observe the ants moving around, try and identify their entry point into the kitchen. This may take some scouting to identify, but you should be able to locate the crack, hole, or tear that they’re coming in through. This could be a crack in the kitchen tile, a gap in caulking in a kitchen window, or a tear in a window screen.

Before you plug up the gap, try and observe where they’re carrying the food they’ve found to. With any luck, you’ll be able to zero in on the nest itself. Nests are typically outdoors, although there can also be smaller nests indoors.

The nest (or sometimes nests) are the ant’s base of operations. This is where the egg-laying queen resides, and where the ants send out their scout ants from. Destroying it will not only deter the ants from coming back into your home but should eradicate them completely.

If the nest is outdoors, you can destroy it by pouring a bucket of boiling hot water over it, or by using an outdoor insecticide like Nature-Cide All Purpose Insecticide to knock out the whole nest in one go. This insecticide is safe to use around small kids and household pets as well.

If the nest is inside the house, then the process is a little more challenging. Because ants like to build colonies in protected spots like under floors, in between walls, or between cabinets, you may have a hard time getting access to the actual nest. When you’ve located a nest, a good way to eliminate is by using borax powder on the outside of the nest.

Once you’ve eliminated the nest to the best of your ability, you’ll want to remove any potential sources of food for other ants to find. Ants will eat just about anything but are particularly attracted to sweet, sugary foods and liquids like honey, soda, juice, etc. 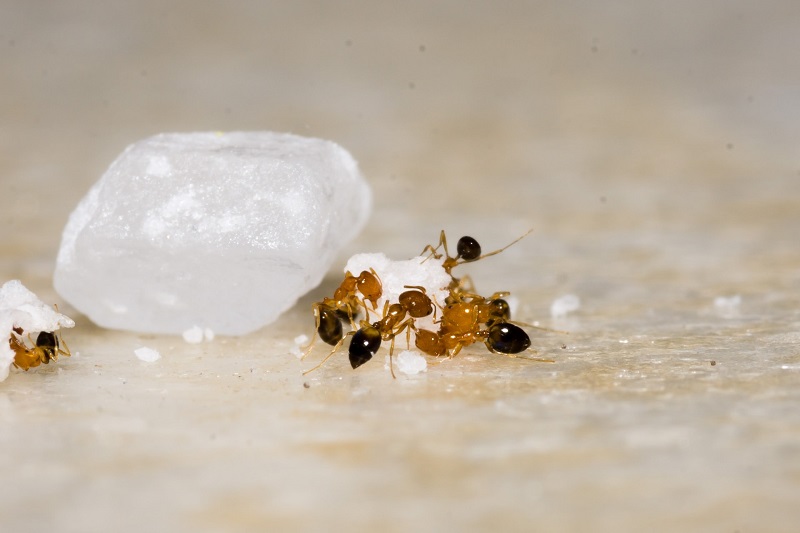 Safely store and seal any of these foods you happen to have to lie around the kitchen. Keep anything that might attract their attention in an airtight container and quickly clean up any spills before it can attract the attention of any ants.

If you’ve ever dealt with an ant infestation, you might be familiar with how the colony manages to locate food sources. First, so-called ‘scout’ ants are sent out to scour the area for any potential food sources. Once the scouts locate some food, they’ll take some of it back to the colony and before you know it you’ll have an army to deal with.

If you’re unable to locate the ant’s nest, or it’s in a difficult-to-access location, then a good alternative is deploying traps or baits. Bait stations like the TERRO T300B Liquid Ant Killer contain an ant attractant mixed with borax from the trap back to their hive. Borax acts as a strong poison to ants but is essentially harmless to humans and pets.

You’ll want to deploy the traps as close to the entry point in your kitchen as possible. This will ensure that the ants will detect the bait right away before moving on to other food sources. During the baiting process, you’ll want to remove any other food sources in the kitchen, so they’re forced to feed on the bait.

If you’ve got some borax lying around, you can make your own baited traps by mixing one scoop of borax powder with a cup of syrup.

Once you’ve eliminated the majority of the ants, you may still have some stragglers around. Ants move around in trails using pheromones to signal for other ants to follow them. Erasing the ant trail is akin to cutting their lines of communication.

Keep in mind; because the ant trail uses pheromones, merely wiping it away won’t eliminate it. You’ll need to use something a little stronger to chemically eliminate it. Bleach or a water/vinegar mixture works well for this task. 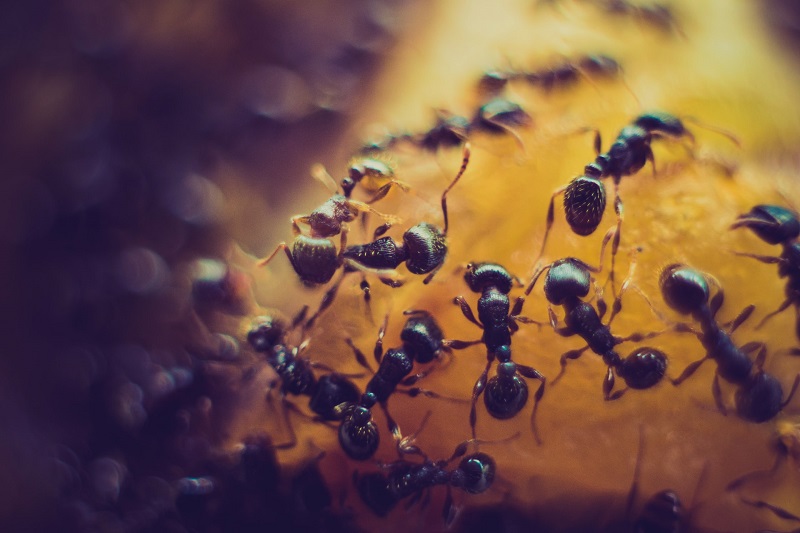 Another good option for eliminating the ant trails is by sprinkling diatomaceous earth along the routes. Diatomaceous earth is actually the fossilized remains of tiny, aquatic organisms called diatoms. When ants and other bugs are exposed to it they dry out and die by absorbing the fats and oils from the insect’s exoskeleton.

6) Ant-proof your Kitchen for the Future

After getting rid of ants in the kitchen, you’ll want to make sure you don’t have further infestations in the future.

To prevent ants from coming back to your kitchen: