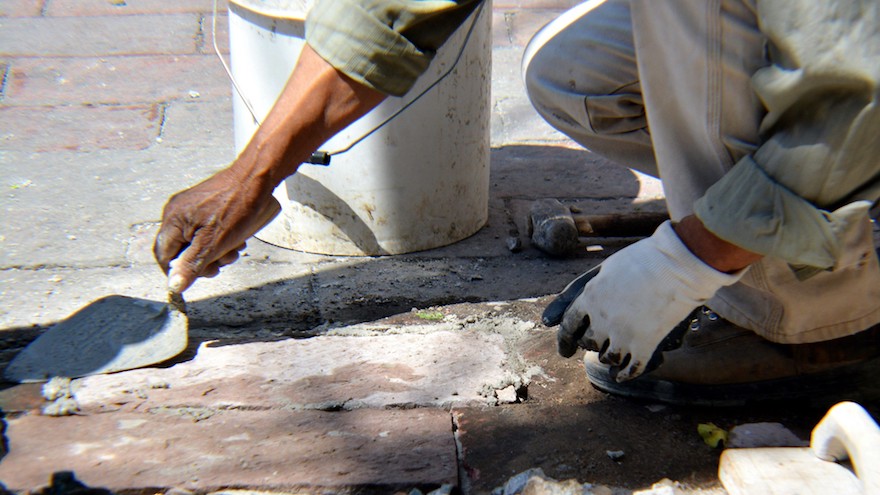 If you’re planning a DIY project involving tile installation, then you’ll need to be familiar with both of these materials. Using mortar instead of grout (or visa-versa) will result in a poor-quality installation which may need to be completely re-done.

Let’s take a closer look at mortar vs grout, so you’ll be well prepared to complete that DIY project you’ve been putting off.

Mortar is an adhesive cement used to stick one material to another. It’s made from a mixture of cement, sand, water, and additives for increasing bonding, flexibility, and water resistance. It forms a smooth, buttery consistency that sticks to a trowel almost like peanut butter to a spoon.

Mortar has a number of different uses depending on the specific type. It’s used for adhering brick and concrete blocks together when building walls, as well as for securing floor and wall tiles to surfaces.

When compared with typical concrete, mortar has several major differences. It doesn’t have the same level of strength as concrete, has a higher air content, and also has the ability to retain more water.

The reason mortar doesn’t need to have the same strength level as concrete is that you generally want mortar to be the weak point in your masonry job. That way, if things shift over time, it’s the mortar that breaks instead of the bricks or the tile. Then, repairing the masonry is as simple as cleaning out crumbling mortar and replacing it with fresh mortar.

One of the most commonly used mortars in DIY is thinset mortar. This is a mortar specifically formulated for securing tiles to cement, stone, or backer board. It’s designed to be used in relatively thin layers and has excellent bonding capabilities.

Mortar often, but not always contains hydrated lime. This is added to create a denser, more water-resistant product. This type of mortar is referred to as lime mortar. The other common mortar type is cement mortar. It contains Portland cement, fine aggregate, and water and functions nearly the same as lime mortar.

Grout is a cement-based filler product designed to flow and fill gaps left in tiles as well as for sealing sections of precast concrete. Unlike mortar, it’s not primarily an adhesive, rather it’s a sealer and gap-filler.

Because it’s designed to flow into small gaps, it’s much thinner and more viscous than mortar. This viscosity makes it ideal for filling in tiny gaps that would be difficult or impossible to get mortar into. You’ll find some type of grout in between tiles on your bathroom or shower floor.

Grout consists of cement, water, fine aggregate, and sometimes additives like epoxy or polymer. It’s designed to form a watertight seal once cured and sealed with an additive, which prevents mold and mildew from growing in your bathroom or shower.

Grout comes in a variety of colors and as well as either powdered or pre-mixed forms. There are also several different types of grout, which are tailored for slightly different applications.

Now that you’ve got a solid grasp on the basics of mortar vs grout, let’s take a closer look at the differences between the two materials.

Applications of Mortar vs Grout

Both mortar and grout are cement-based construction materials, but that’s where the similarities end.

Mortar is a bonding material used to joint bricks, blocks, or ceramic tile. It’s highly workable and achieves a consistency similar to smooth peanut butter or bondo. In fact, one of the ways you know your mortar has achieved the right consistency is when the trowel will stand upright without falling over in the mixture. Mortar can be made in a variety of different ways, with some methods utilizing lime or other additives.

Grout is a gap-filler and sealer designed to flow between the narrow gaps between ceramic tile. It’s thin and viscous and is trickier to work with a trowel than mortar is.

When it comes to the strength of the two materials, you might be surprised to learn that grout is generally stronger than mortar.

This might seem counterintuitive, as you might think the stuff needed for building brick walls would be stronger than the gap filler for the tile in your bathroom. The reason for this is you generally want the mortar to be the weak point in any masonry project. That way, if anything fails, it’s the easy-to-fix mortar rather than the difficult to repair brick.

Compressive strength is the metric used to measure cement-based materials. It’s a measurement of a material’s ability to withstand pressure and is measured in pounds per square inch (PSI).