Unless you’re a licensed plumber, you probably haven’t spent a lot of time crouched under your sink tinkering with drain pipes. But occasionally one of these pipes starts leaking or gets clogged, and learning how to perform a p trap replacement can save you a costly visit from the local plumbing company!

A P-trap, also commonly referred to as a sink trap or a drain trap, is the curved piece of PVC, brass, or ABS plastic underneath your bathroom and kitchen sinks. The name comes from the pipes P shape when viewed horizontally.

The curved pipe is designed to retain a small amount of standing water – which acts as a seal preventing sewer gas from leaking into your home. It also functions as a convenient way to clear clogs, as trapped debris typically collects inside the trap rather than further along. In fact, if your sink isn’t draining like it used to, remove the P-trap and you’ll probably be surprised with how much gunk you’ve got in there!

Let’s take an in-depth look at P-trap replacement, so you’ll be able to remove and replace a P-trap like a pro.

The first step to P-trap replacement is preparing the work area. Because you’ll be working in the dark, difficult-to-access area underneath the sink, you’ll want to make it as comfortable a work area as possible.

If the area is dimly lit, consider getting a work light of some sort to illuminate it. You’ll also want to place a bucket or large bowl underneath the drain trap to catch any water that spills out.

Next, you’ll want to unscrew both locknuts. If possible, do this by hand, but if the nuts are too tight, use your tongue-and-groove pliers to get it started. 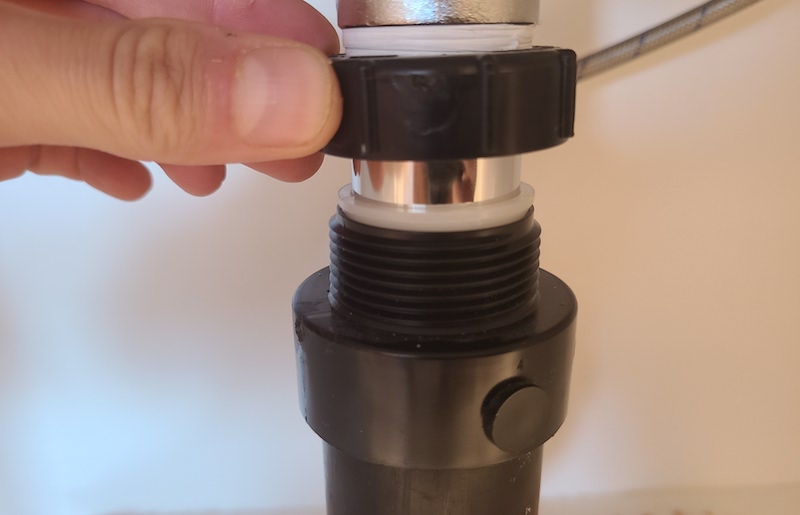 At this point, you’ll notice some water leaking out of the trap, this is normal and not cause for concern.

Once the P-trap is loosened, you’ll want to remove it and empty the contents into the bucket. Now’s a good time to remove any debris or blockage if you plan to reuse the same trap.

If you’re replacing the entire drain trap assembly, you’ll need to remove the trap arm from the drain stub-out.

Now, go ahead and remove the trap arm connecting to the wall pipe. Unscrew the slip nut the same way you did in the previous step.

Now you’ll want to test the new drain trap (both the p-trap and the trap arm) to see if they’ll fit. 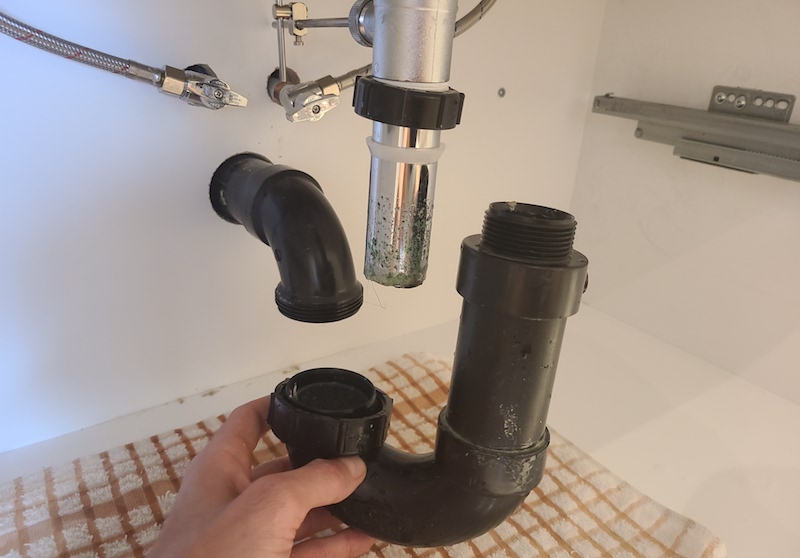 Keep in mind when you’re picking out the drain pipe kit that they come in different diameters. 1 ½” and 1 ¼” are commonly used sizes for kitchen and bathroom sinks, while bathtub and shower drains commonly feature 1 ½” or 2” diameters.

First, fit the new trap arm into the wall pipe and secure it with the slip nut and washer. Then position the p-trap to make sure it’ll fit into the tailpiece below the drain. If the trap arm is too long, you may need to cut it down to the right size.

Step 5: Cut the Trap Arm to Size (If Needed)

If the trap arm from the previous step is too long, then you’ll need to cut it down to the right size to complete the installation. Mark the cutting location with a marker or grease pencil, and then use a hacksaw to cut it to the right length.

Now, slide the slip nuts into position and tighten them against the fittings. Hand tighten the nuts until they’re completely tightened.

Finally, you’ll want to test the new drain trap to make sure it’s working properly. Turn on the bathroom faucet and allow the water to drain through the trap while you watch it for leaks. If any of the joints are leaking, they may need to be tightened using piers.