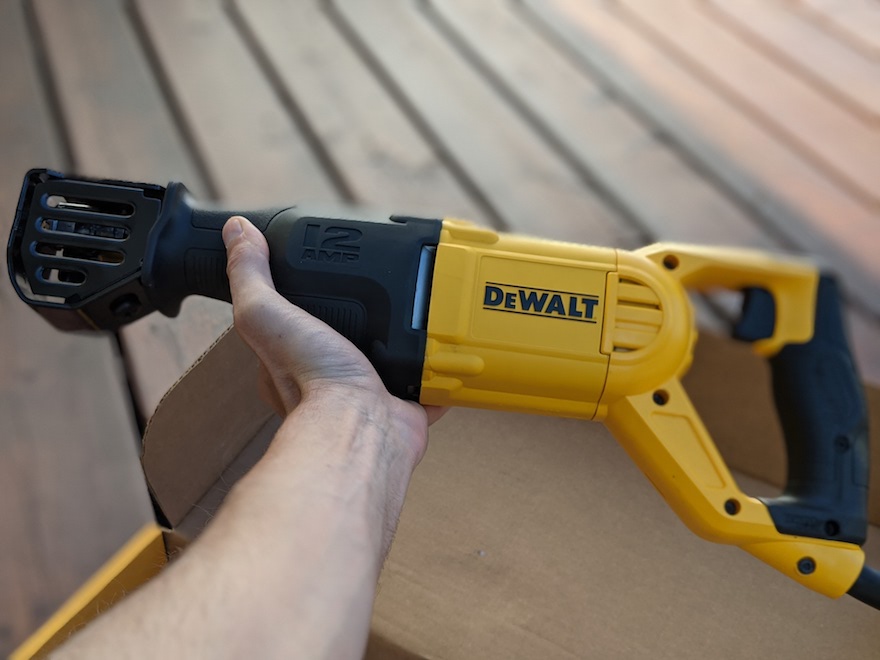 While it may not feature all the bells and whistles of newer cordless saws, the DeWalt DWE305 reciprocating saw is reliable, versatile, and ideal for homeowners and DIYers. With a 12 Amp motor, it’s compact enough to squeeze into tight spots, while still having enough juice to rip through PVC, metal, and masonry with ease.

This popular model has been around for a few years and remains one of the most consistently popular reciprocating saws on the market. It features a smooth variable speed trigger, a four-direction blade clamp with a keyless blade clamp, and a compact overall design.

The shoe design is different from many other reciprocating saws, with a fixed metal housing that doesn’t move at all while your cutting. This gives it a solid feeling while making cuts, although you sacrifice some blade visibility.

Right out of the box, this thing feels like quality. It’s got that signature DeWalt feel – professional, competent, and ready for serious work. At just 7 pounds it feels surprisingly light, and maneuvering it single-handed is not difficult at all. 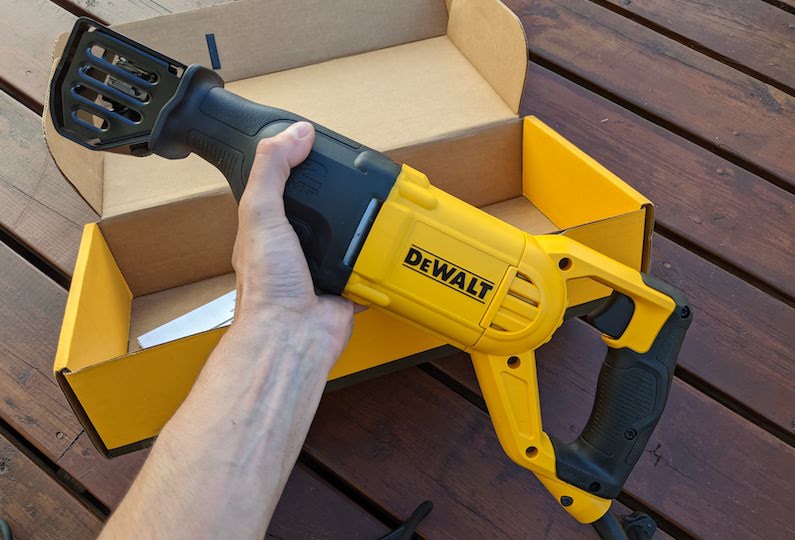 The first thing you’ll probably notice about this tool is its simplicity. It doesn’t feature a ton of bells and whistles – which is just perfect as far as I’m concerned. A reciprocating saw should be a straightforward cutting and demo tool and doesn’t really benefit from gimmicky add-ons that some manufacturers like to include.

Moving to the grip, you’ll notice the trigger grip is excellent, with a form-fitting handle that fits in your hand naturally and effortlessly. The front grip is also comfortable and well-designed, with a tapering grip that allows you to control the tool without any excess bulk.

Let’s take a look at some of the key features of the DeWalt DWE305 reciprocating saw, and how they stack up against the competition.

The first thing that’s sets this saw apart from other similarly priced reciprocal saws is its blade clamp and shoe design.

The lever-action blade system allows you to change blades in seconds, simply lift up on the lever, and the blade clamp releases – allowing you to insert or remove a blade. This system is far superior to the old-school shaft-mounted twist release.

Unlike most blade clamps, which give you the option of mounting the blade either facing up or down, the 4-directional blade clamp also lets you mount it sideways facing in either direction. This is a cool feature and could be very useful if you needed to make cuts in a tight space where maneuverability is limited.

The shoe is another unique design feature of this saw, and it comes with its own setup pros and cons. Unlike the typical pivoting shoe – which swivels as you maneuver the tool – the shoe is fixed and doesn’t move at all. This gives you a nice solid feeling when your making cuts, but also makes seeing the blade a little more challenging. For my money, the solid shoe is superior, as you generally don’t need to make super-precise cuts with a reciprocating saw.

The saw features a 12 Amp motor, so it’s more of a compact saw when compared with larger 15 Amp models. This means you’ll be able to use it for longer durations as well as use it overhead without wearing yourself down.

The variable speed trigger allows you to generate a cutting speed between 0 and 2900 strokes per second. This gives you plenty of speed and power, and in my usage, it cut through hardwood, softwood, PVC, and metal with relative ease.

The saw’s stroke length is 1 1/8” – which puts it in the middle of the pack in terms of the competition. This combined with the 2900 strokes/second gives you a nice combination of speed and power, which will handle cutting through various materials easily.

DeWalt offers the saw with a three-year limited warranty, a 90-day money-back guarantee, and one year of free service. This is on par with most other prosumer tools, and gives you ample protection should something go wrong with your tool.

It’s also a good deal cheaper than going with a battery-powered model, and of course, a corded saw means you’ll never need to purchase replacement batteries.

All in all, the DeWalt DWE305 makes a great overall saw for the average DIYer, homeowner, or anyone who appreciates a compact and powerful reciprocating saw that still provides plenty of functionality. It’s a fairly basic tool but has everything you’re looking for in a saw of this type, without all the bells and whistles that don’t add much to the bottom line.

The four-directional blade clamp adds increased optionality when making cuts in tight spaces, while the fixed metal shoe is a mixed bag. The variable speed trigger and grip are both excellent, which makes cutting through just about anything comfortable and smooth.